Just out, is a new, special ‘Ecopoetics’ issue of the magazine Stand, edited by Vahni Capildeo (former Judith E Wilson Visiting Poetry Fellow), which includes, alongside work by many different poets, Drew Milne’s new poem ‘Nurdles’ and one of his lichen emblems.

The magazine offers a wide range of perspectives on ecopoetics, including poems by Joseph Minden, Holly Corfield Carr, Lucy Sheerman, and Kat Addis. In her editorial, Vahni Capildeo comments that: “The word ‘ecosystem’ is offered not because a ‘system’ can be deciphered as functional and/or closed, but to suggest the interwoven yet undomestic. The etymology of ecopoetics, from Greek oikos (home) and poesis (making), is often remarked on as emphasising dwelling and ways of making a dwelling. Why, however, must the human be exceptional or central? Many critiques can be made of what happens when ecopoetics revolves around the history of the term. I would merely like to suggest that unmaking and defamiliarisation are always on a continuum with identification and creation.’

Following on from his sequence of poems ‘Lichens for Marxists’, published in In Darkest Capital (Carcanet, 2017), Drew Milne’s poem registers the catastrophic ecological impact of billions of plastic nurdles, while his Lichen emblem offers a modest homage to the ecological significance of lichens. 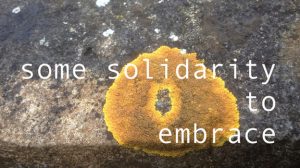